I See You: Navigating Free Speech and Civil Discourse 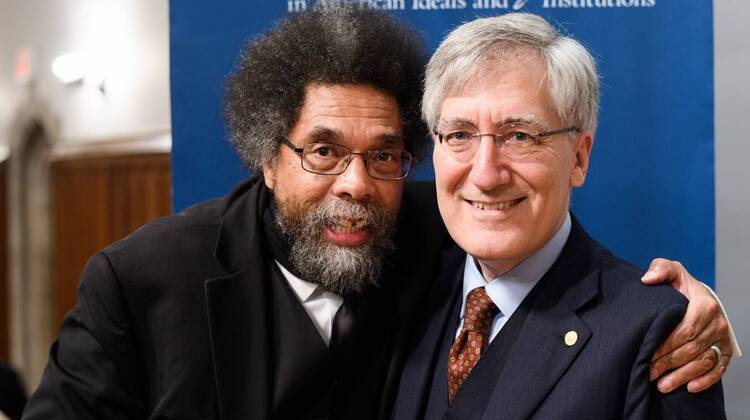 I See You: Navigating Free Speech and Civil Discourse

In our very fractured society, how can we bridge real differences while maintaining meaningful relationships and civil conversation?  Is it possible to have vigorous free expression while demonstrating genuine respect towards others?  Join us as we delve into to these important topics with two leading political scientists, Cornel West and Robert George, who share a friendship across authentic difference.

Dr. Cornel West is the Dietrich Bonhoeffer Chair at Union Theological Seminary. Dr. West teaches on the works of Dietrich Bonhoeffer, as well as courses in Philosophy of Religion, African American Critical Thought, and a wide range of subjects –including but by no means limited to, the classics, philosophy, politics, cultural theory, literature, and music. Dr. West is the former Professor of the Practice of Public Philosophy at Harvard University and Professor Emeritus at Princeton University. Cornel West graduated Magna Cum Laude from Harvard in three years and obtained his M.A. and Ph.D. in Philosophy at Princeton. He has written 20 books, including Race Matters and Democracy Matters. Dr. West is a frequent guest on the Bill Maher Show, CNN, C-Span and Democracy Now. He has a passion to communicate to a vast variety of publics in order to keep alive the legacy of Martin Luther King, Jr. –a legacy of telling the truth and bearing witness to love and justice.

Dr. Robert P. George is McCormick Professor of Jurisprudence and Director of the James Madison Program in American Ideals and Institutions at Princeton University. He has served as Chairman of the U.S. Commission on International Religious Freedom and on the U.S. Commission on Civil Rights and the President’s Council on Bioethics. He was a Judicial Fellow at the U.S. Supreme Court, where he received the Justice Tom C. Clark Award. A Phi Beta Kappa graduate of Swarthmore, he holds the degrees of JD and MTS from Harvard University and the degrees of DPhil, BCL, DCL, and DLitt from Oxford University, in addition to twenty-two honorary doctorates. He is a recipient of the U.S. Presidential Citizens Medal, the Honorific Medal for the Defense of Human Rights of the Republic of Poland, the Canterbury Medal of the Becket Fund for Religious Freedom, and Princeton University’s President’s Award for Distinguished Teaching. He is a member of the Council on Foreign Relations.

I See You: Navigating Free Speech and Civil Discourse is supported in part by Heterodox Academy. The ability for HxA to provide Grants for HXCommunities events and other activities are made possible in full through the support of the John Templeton Foundation. The opinions at this event (or through such activities) are those of the individual Grantees, organizers, speakers, presenters, and attendees of such events/activities and do not necessarily reflect the views of Heterodox Academy and/or the John Templeton Foundation.